In our software development process we want more value: more useful software delivered. The first technique we tend to reach for is to add more developers to the team. How well does this work?

There are a lot of factors involved, so let’s think through it for one set of assumptions:

In this scenario, then the amount of useful code delivered increases linearly with the number of developers. Two developers deliver two units of code, three deliver three, etc. The amount of time needed for PR review doesn’t increase, because no matter how many developers you have, if each one reviews just one other developer’s code, everyone gets a review. (I don’t include the one-developer case in this list because one developer isn’t doing any code review, so they have more time to write code and their output isn’t directly comparable.)

But the linear increase of output doesn’t increase indefinitely. At some point, the amount of useful code added slows down, even to the point of the team being less productive than before the last developer was added. This is a widely-understood phenomenon. What isn’t so widely understood is at what point the slowdown happens; I think it’s far earlier than almost any of us realize.

This post’s assessment of the slowdown point rests on two major assumptions. Let’s examine them.

Put these two assumptions together and we can draw a conclusion: familiarity with the codebase will make or break your project.

This conclusion suggests a goal: for every change to the code, we want someone who is familiar with the pre-existing code involved: that is, either writing the code or reviewing it before merge. This will help ensure that every code change is high-quality.

How can I make such a specific claim? It’s based on the logistics of being familiar with the code you’re working on. Let’s see why.

When you are a solo developer on a project, you’re familiar with all of the code because you wrote all of it. This means a high level of quality for whatever you’re working on. Now, over time your memory of code fades, so you don’t have perfect familiarity of all the code you’ve ever worked on. For simplicity of analysis, we’ll set aside the impact of memory for most of this post, then bring it back in at the end to account for it.

When you have a team of two developers, each is still familiar with all of the code, because for each chunk of it, you either wrote it or reviewed it. This means you’ll still have a high level of quality in the code you write.

What about a team of three developers? If you think about it, it becomes clear that for every PR of new code, either the author or the reviewer will be familiar with that code. Here’s why we can conclude this:

Now, what about four developers? Here things get difficult. Again, call the developer who authored the PR A, and the reviewer B. Is one of them familiar with the pre-existing code?

There are 12 possible combinations of who wrote and reviewed this code previously: 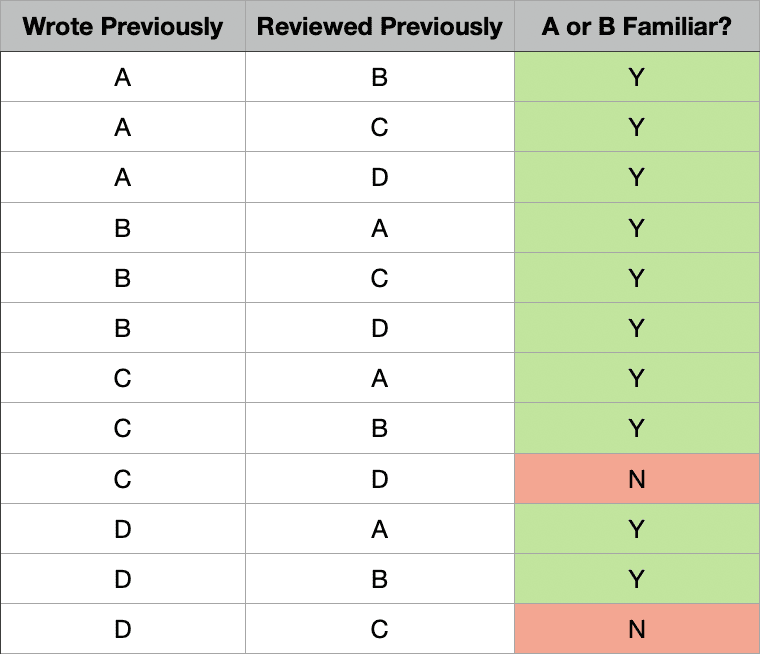 In 10 of the 12 cases, either A or B wrote or reviewed the previous code, so someone in this PR is familiar. But in two of the cases, neither is familiar with the code: the case where C wrote it and D reviewed it, and the case where D wrote it and C reviewed it. This is a new situation: now there is a PR that will be merged into the codebase modifying code that neither the author nor the reviewer will be familiar with. This means the quality of that PR will be impacted. Previously, there was no such unfamiliar code; all code was familiar either to the author of the PR or the reviewer. Now, only in 10 of 12 cases, or 83% of the time, will the code be familiar to those involved in the PR.

The Impact of Unfamiliar Code

How big an impact is that loss of familiarity? There are at least three ways to think about it.

The first way to think about the impact is that 83% of the code written going forward will be familiar. 83% is still a fairly high percentage, and you gained the benefit of an additional fourth developer’s worth of output. But on the other hand, with 1, 2, or 3 developers someone in the pair was familiar with 100% of the code written. A sudden drop from 100% to less than 90% is significant.

The second way to think about the impact is to focus on the new cases for author/reviewer combinations: 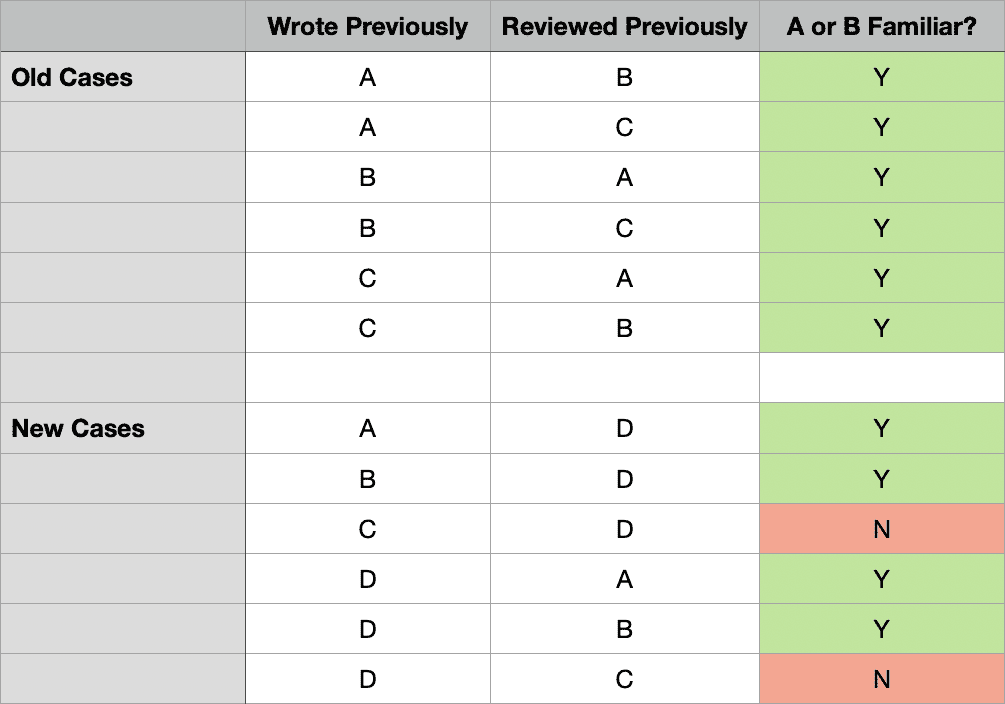 But there’s a third way to think about the impact that more directly relates to value delivered, and its picture isn’t good. This is to compare how much familiar and unfamiliar code is written for the three and four developer cases.

Is this difference mitigated by the fact that you don’t really have perfect familiarity with all the code in the three-developer case, because familiarity fades over time? No, there is still a major difference. In the three-developer case your only unfamiliarity comes from fading memory, whereas with a fourth developer you’re adding twice as much code that you’ve never seen right from the beginning. Instead of a gradual decay of knowledge, you start out with code you’re completely ignorant of.

How Can This Be?

The drastic change from three to four developers is surprising. If you’re not sure how this math can be correct, let’s think about the cases that lead to it.

First, let’s look at the new code that D will be writing now that they have joined the team:

We added a fourth developer D who is now writing code that would not have been written before, that A will write a PR to extend in the future, and B will review. 2/3 of the time A or B reviewed that code, so it’s familiar. But 1/3 of the time, when C reviewed D’s code, that the code is unfamiliar.

Next, let’s look at the old code, that A, B, and C would have been writing anyway:

This is why adding D increases the amount of unfamiliar code more than it increases familiar code. The new code written isn’t always familiar, and now code that would previously have been familiar is less frequently familiar.

To be clear, the problem isn’t the fourth developer added to the project, in and of themselves: we said in the assumptions that all developers have the same skill level and are fully onboarded to the project. D is not “the new developer;” D is just “one of the two developers who isn’t writing or reviewing a given PR.” The blame isn’t on one person; the blame is on the unavoidable dynamics of a four-developer team.

You added a fourth developer to the team because you wanted an increase in the amount of code written, with the implicit assumption that most of that code would be high quality. But your goal hasn’t been achieved. Adding the fourth developer has only increased the amount of familiar code from 3 units to 3.33, and it has introduced the costly dynamic of unfamiliar code, 0.67 units of it.

To see how this dynamic continues as a fifth and more developers are added to the project, we can write an equation to describe the different review scenarios and chart it for higher values of team members. As you might expect, things continue to get worse: 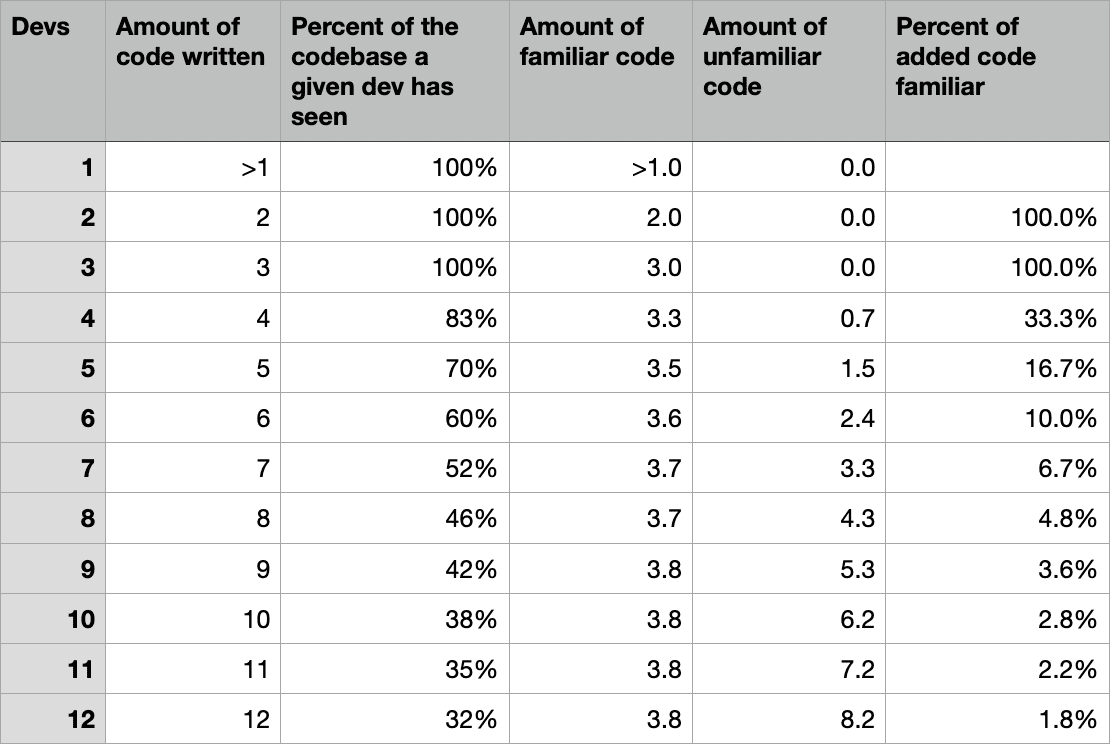 A drop in quality is seen far earlier than this, though, and at a precise moment: when you add the fourth developer to the team. All of a sudden, you go from adding a developer who adds all familiar code, to a developer who results in twice as much unfamiliar code as familiar code. If you accept the assumptions of this post that familiarity impacts code quality, then this is not a good tradeoff.

What Do We Do?

What should you do with this information? I can think of two not-so-good responses and two better ones.

Here are the responses I would recommend:

These two approaches have been discussed at length elsewhere better than they could be summarized here. But the surprising thing may be how early you need to reach for those approaches. They aren’t for when your team has reached a dozen developers. There is a specific impact of team growth on code familiarity at a precise moment: when you add a fourth developer. And even if your team is three or fewer developers now, if there is a chance you’ll add a fourth developer in the future, the code you’re writing now is what you’ll be building on. If you take the code-familiarity problem seriously now and mitigate it, you’ll be ready for if and when you add the fourth developer–or you may find that you don’t need them after all.

Thanks to Bryan Lindsey, Jeremy Sherman, Nate Sottek, and Ron Jeffries for review and input.